Cross-posted with the Canadian Youth Delegation’s and PowerShift Canada’s blog.

One of my favourite moments at PowerShift 2012 was attending the panel which spoke of “Building a Multi-Issue Movement for Climate Justice.” Among the list of insightful and experienced panellists (such as Clayton-Thomas Muller, Sarah-Jayne King, and Dave Bleakney) was Harsha Walia, a deeply respected local organizer based in Vancouver, who blew my mind away.

Harsha’s words echoed in my head throughout the entire conference, and will continue to stay there at the back of my mind, as I’m continuing to organize for the many years to come.

She spoke of our need to work within an anti-oppression analysis, to decolonize, and to challenge the frameworks of capitalism. And most of all, I think she brilliantly addressed the gaps that exists within the environmental justice movement: the fact that white privilege, racism, and colonialism are still being played out within the very same movements that we are organizing in.

(To hear more from her on “Anti-Oppression, Decolonization and Responsible Allyship,” you can also check out her interview here.)

There have also been gaps in the climate justice movement that I’ve also noticed myself. Here are some examples that took place at PowerShift based upon my experiences:

The first is the lack of representation of the racial diversity that exists. The environmental movement has never been more white-dominated, and unfortunately,  PowerShift reflected this.

I looked around at the spaces of my workshops and a majority of the youth who participated in the conference are white; this prevents diversification of the voices in our movement to the extent that we need it to be. It really should have been the opposite. In terms of coming together to advocate for “climate justice,” representation should come directly from people who have lived experiences of climate injustice, who unfortunately happen to be disproportionately represented by frontline indigenous communities and people of colour. Representation extends beyond just having them as a sole speaker and panelist. It means representation in leadership, in both organizing and participating. 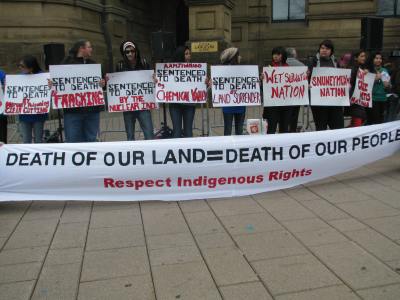 The second gap that I noticed was activism with entitlement – the assumption that these lands and resources are “ours” to claim and protect. There was a strong voice at the conference advocating for “our democracy” and for “our resources” to be better protected. Yet, when our narratives run alongside these claims, we are failing to recognize the colonization that has taken place here upon these lands.

Recognizing that colonization exists and acting upon it, means challenging this notion of “the state” and “democracy” which have been built upon centuries of violence executed upon indigenous communities and this includes the theft of their lands. If we believe that the same system of state can still save us – that it’ll eventually work out if we elect different political leaders and new policies, are we truly decolonizing? Are we incorporating the realities of those who have experienced and are still experiencing colonization? I argue we are not.

The examples mentioned above are specific to PowerShift, but are not just exclusive to the conference. They represent the needs and gaps that we need to address as a generation in this climate justice movement.

One of the biggest lessons that I have walked away with from this conference is knowing of the opportunity that we hold for building a multi-issue movement – one which is inclusive of all peoples’ lived realities, experiences, and struggles.

There are many examples in which anti-oppression, anti-racist, and anti-colonial principles have been highlighted within the climate justice movement and within PowerShift last month. And finally, for once, we had a conference that understands how social and environmental issues are not separate but are interlinked; that environmental destruction is not just based on capitalism, but also on racism, white privilege, colonialism and patriarchy.

And more so than ever before, we need to act upon this momentum to address these gaps and diversify the voices within this movement. Understanding these principals is not enough. Just walking with these analyses is not enough. We need to practice and implement them.

And for me the question is: how well can we do this? How can we build a climate justice movement while decolonizing and addressing other forms of oppressions at the same time?

That is probably one of the biggest and toughest questions that we will need to tackle as a generation. However, I’m confident that we’re able to do it. And as a member of the CYD this year, that’s the hope that I’ll be carrying on with me to Doha, Qatar as our team sets foot into the UNFCCC’s COP 18 to organize and take action for climate justice. I also know that we’ll be fighting for so much more than that.

View all posts by Peggy Lam